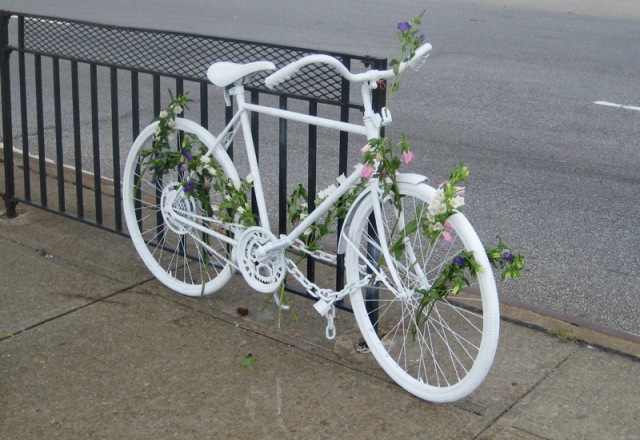 We get to the park too early.

Not really. It just feels that way because my kid wants to go on the swings and there’s no shade, so the sun blazes down as I push and it’s all he wants to do and I can’t imagine doing it for an hour.

I notice a women across the street.

She is hunched over a ghost bike and my immediate assumption is that she’s trying to remove something from it.

I can’t believe anyone would try to take something from a ghost bike.

She is gesturing to the car parked several feet in front of her. A man sits in the driver’s seat and I think they must know one another.

But then I see that she’s crying.

She isn’t taking something off the bike.

She heaves and howls.

Something inside of me aches.

I look around. No one else seems to notice. Or care.

I wonder who this person on the ghost bike was to her and again, I assume. I assume it was her child.

I consider getting my kid out of the swing and walking across the street and asking if she wants a hug.

Instead I keep pushing the swing, trying not to think about what such a loss would feel like.