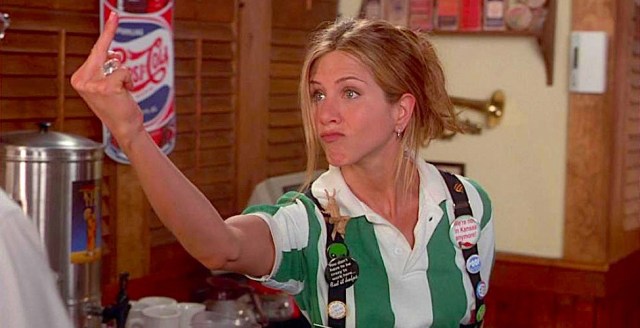 I’ve had many jobs over the years.

I’ve been working since I was eleven, when I started babysitting for the kids down the street.

You get the picture.

I was a waitress twice. The first was at a small, family owned diner. It didn’t last long, but I was good. Friendly. Remembered orders. Came back the appropriate amount of times. Customers liked me.

When I was looking for some part-time work about six years ago, my roommate’s boyfriend helped me get a job at a new Italian restaurant.

One of my co-workers was a very young woman. She would take the menu home and study it. She was there to learn and be taught and took orders.

Maybe it was a bit of pride or lack of concern, but I had no interest in either kissing ass or doing more than I had to on my off days.

The chef was a real asshole. Apparently this is pretty common in the restaurant industry. You did not talk directly to him. You wrote your tickets clearly and the way he wanted or you may as well be dead.

We did not get to see how much we made in credit card tips and were not allowed to ring up anything on a credit card.

We opened right around the time of Do Division and I worked my ass off that day. It was hot and chaotic and things were still not ironed out. I was there for probably thirteen hours.

The owner did not like that I acted as though I knew what I was doing. He was the type of guy who needed to be in charge and women should either be flirting with him or subservient. I was neither.

One day he’d had enough, so he spent my entire shift breaking me down until I couldn’t take it anymore. He intentionally belittled and questioned me so I would mess up or doubt myself. Then he told me to go home, that this job was not for me

Finally I cried. In front of him, which was the worst part.

I’d never been fired from a job before.

It took a lot of teeth pulling, but I finally got my credit card tips. He probably didn’t give me everything that I was owed, but at least I was out of the toxic environment.

I give women in the service industry A LOT of credit for doing what they’re doing.  The amount of bullshit that is directly related to working with and for men is outrageous, rampant and seemingly endless.